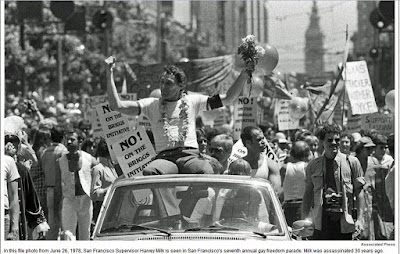 “It is extremely important to recognize this historic figure in the LGBT civil rights movement,” said George Zander, Coachella Valley field manager for Equality California, a group that works on behalf of lesbian, gay, bisexual and transgender people.
“I wasn't sure whether he would sign the bill, but since it is more about his ‘legacy' than anything else now, I felt he would do the right thing and sign it.”

In the gay marriage bill, all legally married same-sex couples who married outside California before Proposition 8 passed in November are recognized as legally married in California, said Geoff Kors, executive director of Equality California and part-time Palm Springs resident.

“And even more importantly,” Kors said, “that all same-sex couples who get married in other states or countries after Prop. 8 passed be treated the same as married couples with the exception of use of the word ‘married' for legal purposes.”

“In short, this measure honors the will of the People in enacting Proposition 8 while providing important protections to those unions legally entered into in other states,” Schwarzenegger wrote.

In July, Schwarzenegger and first lady Maria Shriver announced Milk was among the 13 inductees into the California Hall of Fame for 2009.
Gay rights groups delivered a petition signed by nearly 40,000 Californians urging him to sign the bill.
Posted by Ephemeron at 10:39 AM